Posted at 16:14h in Winter by Andrew Prazar 0 Comments
During winter, I make an effort to take a solitary walk in the woods at least once a week. I don’t always get around to it, but I’m trying my best to follow through on this commitment. Winter is a season where it’s easy to make excuses as to why you can’t leave the house: it’s too cold, it’s too wet, it’s too dark… but when I finally do get out, I remember how refreshing and restorative the quiet of the woods can be. I rarely run into other hikers and I often witness a lot more animal activity.
Today I stepped out for what I promised myself would be a short walk – 30 minutes at the most. After all, I had work to do! I chose a favorite trail (the Bald Hill/Crooked Pond area of the Boxford State Forest) and set out. An hour and a half later I found myself back at the car, and not regretting a minute of it. Not only did I great very close to a number of our winter birds (including one of my favorites – the golden-crowned kinglet), but I also found myriad tracks crisscrossing the light dusting of snow that covered the thick ice of Crooked Pond. Here’s what I found:
White-footed (or Deer) Mouse 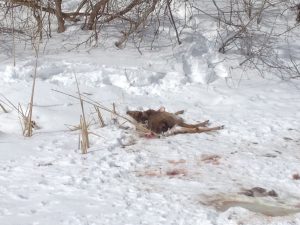 The photo on the left is of a solitary mouse print (there are four tiny paw prints there!). Given the size of mice, the individual characteristics of their tracks are blurred out in all but the lightest dustings of snow. This animal is moving from left-to-right and you can just make out the individual toes of the hind foot in the bottom-most portion of the track. On the right are a bunch of mouse tracks that led from under a log to a lichen-encrusted stick that was frozen in the ice. It’s hard to see clearly here, but the mice were working hard on the lichen – evidence that food is hard to come by in January.
Eastern Coyote
​Bald Hill is a prime location for dog walking so it’s not unusual to see lots of dog tracks, but these tracks suggest a wild canid. The trail here is very disciplined – this animal was moving straight ahead at a steady lope. Domestic dogs tend to wander, distracted by every smell. Also, the toe pad is compact; typically domestic dogs splay their toes on snow or ice to increase stability. The oval shape of these prints also rules out red or gray fox as fox prints are more circular. The lines between the tracks could be the animal’s tail or toenails dragging as it loped along.
Red or Gray Squirrel
Given the habitat, I’m leaning toward this track belonging to a red squirrel (Bald Hill has tons of white pines and hemlocks, the cones of which are a red squirrel’s preferred food). If I’d had my tape measure with me, I could have measured the straddle of the hind feet and made a more accurate guess. What I love about these tracks is how the thin layer of snow over ice provides such fine detail for the prints. In a few inches of fluffy snow, squirrel tracks can look like rectangular divots. Much like with the mouse tracks above, here you can see individual toe pads and claws.

Raccoon
My favorite tracks of the day. Raccoons are not always active during winter. They tend to sleep for weeks at a time, wake up when there’s a thaw, and then return to dormancy when it gets cold again. Clearly this animal is still roaming around after last week’s balmy temperatures. Raccoon tracks are easily identified by their front paws – they almost look like a small, skinny human handprint. The hind paws are more difficult to identify as they resemble a number of other animals with elongated hind feet. The print in the center of the photo on the left is a classic example of a raccoon’s front foot.

In the photo on the right, you can see the classic “waddle” pattern of the raccoon. As the raccoon moves forward, the larger left hind leg is placed next to the smaller right foreleg and then the larger right hind leg is placed next to the smaller left foreleg. This is why in these paired tracks, one track is always larger than the other.
Otter? Fisher? I’m not sure, but definitely a large weasel.
These were the trickiest tracks to identify this morning. I’m fairly confident they are otter tracks, but they could also be fisher tracks. Both are members of the weasel family and therefore have similar gaits and leave similar tracks. Weasels can “bound” and leave paired tracks behind, gallop and leave what appears to be three tracks in a group, or “walk” and leave tracks in more or less a straight line. Here, the otter/fisher has left behind “the group of 3.” Weasels (especially otters and fishers) are great fun to track as they leave behind a wide variety of trail patterns and often travel great distances.

The reason why I believe these are otter tracks is due to the overall round shape of the prints. In my experience, fisher leaves more oblong tracks. These tracks were also huge (about 4 inches wide) which would also indicate an otter. However, Bald Hill is prime fisher habitat (especially with the large squirrel population) so it can’t be ruled out.
My encouragement to you is to take some time to head outside this winter. Whether for exercise, relaxation, or the thrill of learning what animals are around, you won’t be disappointed.