A Fall Full of Fungi 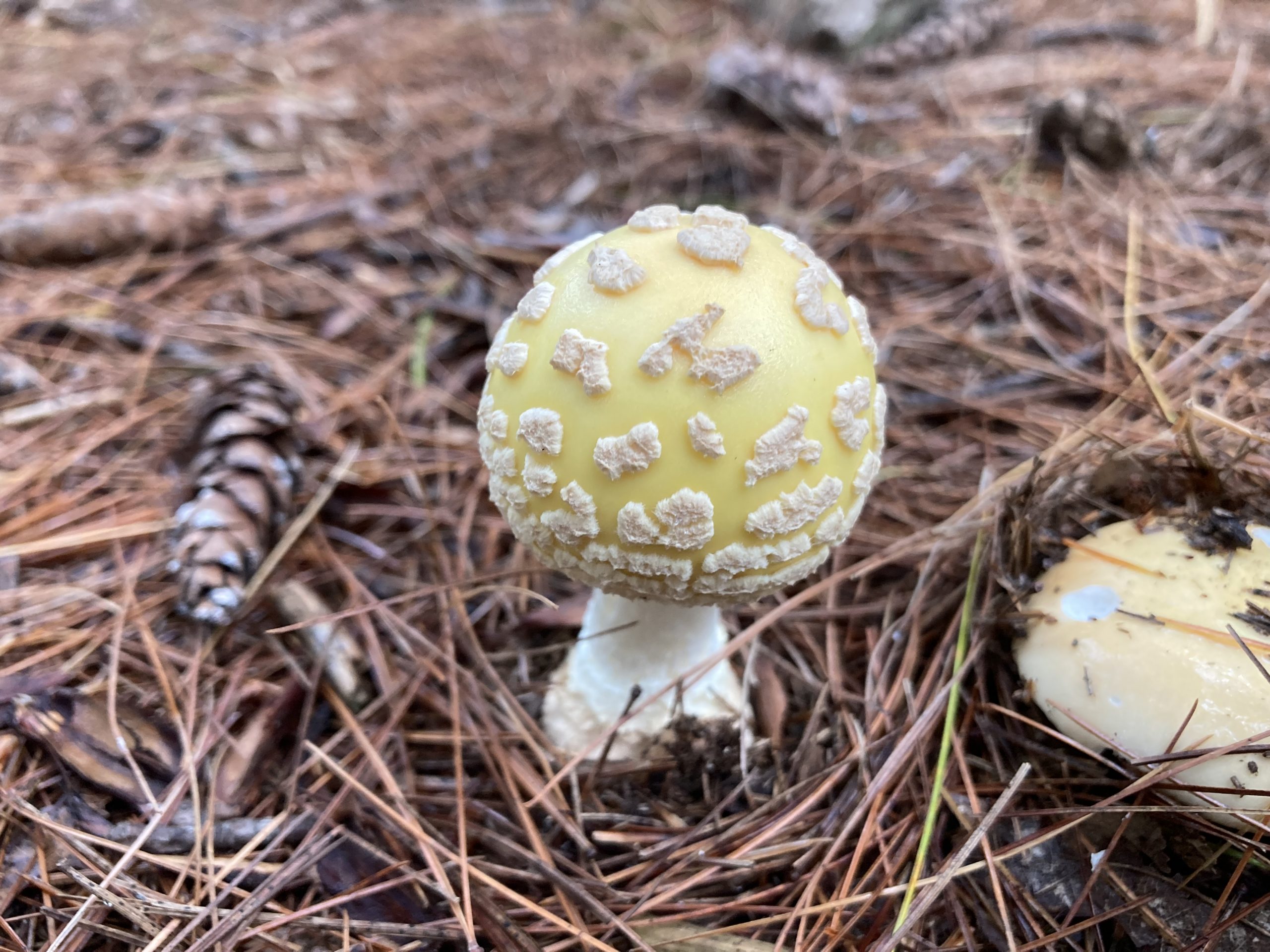 04 Oct A Fall Full of Fungi

Posted at 19:12h in Fall, Fungi by Andrew Prazar 0 Comments

If you’ve spent any time outside during the last month, you’ve no doubt noticed a profusion of mushrooms. A very wet summer (the most rain ever from July – September) combined with typical heat and humidity created the perfect climate for rich fungal growth. For those of us that grow tomatoes, this was not ideal. For those who forage for wild mushrooms, or just appreciate the color and at times bizarre forms of mushrooms, it has been a great fungi season. Given the abundance of fungi, I thought it might be useful to host a little mushroom Q&A with noted fungi expert… me? 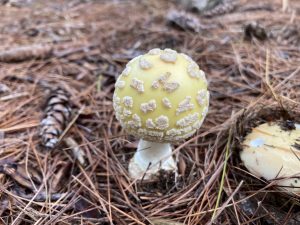 A classic toadstool. From the genus Aminita.

Why are there so many mushrooms this summer/fall?

There are always some mushrooms to be found. Dead logs and diseased trees almost always have some fungal growth regardless of season and most summers you can find a toadstool here or there. This year has seen an especially productive late summer due to the weather. Mushrooms are the reproductive organs of fungi (kind of like a flower) and require a lot of energy to produce. Fungal spores (think of them as mushroom seeds) germinate best in moist, rich soil. Therefore, we tend to see more mushrooms during wet summers when conditions are optimal for reproduction. There’s not a lot of return on investment for a fungus to produce a mushroom during a dry season if very few of its spores will successfully germinate.

If mushrooms are just reproductive organs, where’s the rest of the fungus?

Underground! The vast majority of the fungal body is mycelium, which is composed of hyphae: thin, filament-like structures that weave their way through the soil, soaking up nutrients from decaying organic matter. If you’ve ever rolled a log and seen a mass of small, white threads, that’s mycelium. Mycelium is constantly growing and spreading in search of nutrients and when two hyphae meet up and conditions are ideal, they can produce a fruiting body known as a mushroom. 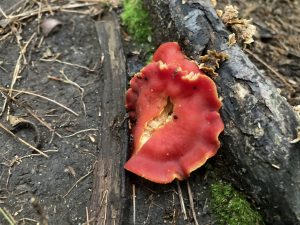 Mushrooms can be found in almost any color

Wait, who are you interviewing for this Q&A? Yourself?

Definitely. But there’s no one else here and while I don’t consider myself a fungi expert (also known as a mycologist), I like to think I know a few useful tidbits.

Fine. Moving on, you mentioned spores. Where do those come from?

Each mushroom produces millions of tiny spores; depending on the species these can be microscopic, but most spores are visible under the right conditions. Most of the mushrooms found in our area either have gills or tubes on the underside of their cap. The spores are released from these gills or pores shortly after the mushroom ripens (usually a few days after the mushroom appears). One exception to this rule is the puffball mushroom, where spores form inside the mushroom itself. You’ve probably found some of these in your yard. They’re about the size of a golf ball (although they can grow to much larger sizes). They start out white and firm, but eventually their outer skin turns brown and papery. When you step on them, a cloud of brown dust emerges – those are the spores! 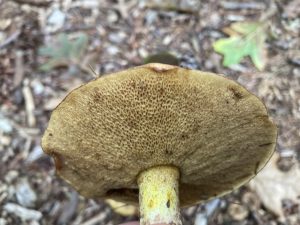 This bolete mushroom distributes spores from tubes on the underside of it’s cap.

So why do we need fungi? It kills my tomatoes, gives me athlete’s foot, and occasionally causes serious illnesses. Why do we want it around?

Fungi is one of the most important organisms on Earth. Along with bacteria, it is responsible for decomposing the majority of organic matter in any given ecosystem. Fungi breakdown complex molecules in decaying matter and release them into the soil, air, and water so that they can be accessed by plants. Theoretically, without fungi we’d be feet deep in dead plants and animals.

Even more importantly, there is a special class of fungi that is essential to plant survival. Mycorrhizal fungi form a mutualistic relationship with plant roots; the fungi receive carbohydrates (i.e. food) from the plants and the fungi provide the roots with nutrients that plants require from the soil, but otherwise would be unable to access. Numerous studies have shown that trees and other plants thrive in areas where mycorrhizal fungi are present and wither where it’s not. There’s additional evidence that fungi aids in chemical communication between individual plants. For example, if one tree is having a rough growing season, or is lacking a particular nutrient, it’s able to communicate with neighboring trees and those nutrients can be shared between the two trees via the mycorrhizal fungi. It’s pretty amazing stuff and currently the subject of many ecological studies.

Interesting. You mentioned there are areas where mycorrhizal fungi are absent. Where did it go?

Any time soil is disturbed, mycelium is destroyed. At any given moment, there are probably thousands of hyphae below your feet. But when a field is plowed, a lot bulldozed, a hole dug, some of that hyphae is damaged or killed. In mature forests, there is likely a rich array of mycorrhizal fungi surrounding root systems. But in a plowed field, an abandoned lot, or any other recently disturbed soil, the damaged fungi are often slow to return especially if their host plants have been removed. It is thought that a number of our invasive plant species benefit when mycorrhizal fungi are not present as it allows for less competition from native species. Some farms are now transitioning to “low till” agricultural practices or permaculture with the thought that mycorrhizal fungi will boost crop productivity without the need for expensive, and at times ecologically damaging, fertilizers.

I like to think with my stomach and I’ve heard there are wild mushrooms that are edible. I’ve also heard that some are highly toxic. How risky is it to sample a wild mushroom?

Incredibly risky. While the chance of you ingesting a deadly mushroom is low, a number of mushrooms will give you the gift of significant intestinal distress. Even some edible mushrooms can impart gastrointestinal illness if consumed raw. Personally, there are only three edible mushrooms I feel confident identifying and consuming and even then, it makes me nervous. There are experienced foragers who have died from making an incorrect identification. Mushrooms are not to be trifled with. 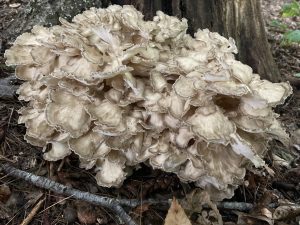 Hen of the woods

How can I learn more about mushroom identification?

A good field guide that specializes in local mushrooms is always the best place to start. The National Audubon Society and Petersons both publish good field guides, although they are not specific to New England. There are a number of good nature apps for your phone too. I recommend Seek by iNaturalist. It has an easy-to-use interface and excellent species recognition.

I guess it would be a little self-serving to thank you for the information since you’re just talking to yourself, right?

Probably. But it never hurts to have a positive self-image. So, I’ll take it. Now get outside and find yourself some fungi.

Fall, fungi, get outside and explore, mushrooms, nature